For the past month or so I have been attempting to cook one meal a week that is a bit more complicated, complex, sophisticated, and/or just different then the things I am use to preparing.

About a month ago I started down this path with campfire gumbo. Gumbo has become one of my more favored dishes and I wanted to give a shot trying to make it. It turned out good, but I had I had to use chorizo sausage without the casing and I did not even come close to making the roux correct. So, almost two weeks later I decided to try making gumbo again, but with a different recipe that was going to involve crawfish. Also, I wanted to make it with the more traditional andouille sausage, as opposed to chorizo. I settled on this Crawfish, Okra & Andouille Gumbo | Crawfish.com recipe which I have provided from a backup PDF I made. This time I had read up a bit more on three kinds of roux and how to make them. The three types are: 1) A flour and oil base, 2) file or ground sassafras leaves, or 3) okra. They are different means for thickening the soup. This time I was able to get the flour and oil based roux to turn a deep chocolate color as the recipe called for, which I found a bit surprising that it would turn this color.  Even though I liked the first gumbo dish I made, this one turned out way better.  I made about four quarts worth of gumbo and found that it was even better as leftovers like described on a few other blogs. I would definitely make this recipe again, but would probably substitute the crawfish with shrimp, because of cost (i.e., $12 a pound vs. maybe $6 for the shrimp).

Now that I had my cajun/creole fix satisfied for a while, I decided I would move on to another style of food that is fast becoming one of my favorite styles of food, next to Mexican dishes. That would be Thai food, I find it to be quite tasty and interesting, not to mention can be made spicy just like the Mexican and gumbo dishes, which is a big plus for me. I have only recently discovered Thai food, in the past year or two, but it is clearly something special and I am particularly fond of the coconut curry dishes.  Therefore, I decided to ambitiously tackle creating my own green curry from scratch, following this recipe. It turns out my curry making abilities are what are actually green. In the end the curry dish tuned out good, but was nothing like what I can get at the two local Thai places in town. I did have to go to three different grocery stores to find almost all of the ingredients, but in the end I still was lacking I believe a crucial ingredient called kefir lime leaves.  Since making this dish, I have found a local source for these leaves. After reading numerous other recipes online to see where I may have gone wrong, as found the dish to turn out no where near as creamy or to have a prominent coconut flavor like at the restaurant. It turns out I think I may have followed the wrong recipe, as this one called for using a casserole dish in the oven, while many others direct the use of a wok. Moreover, I found adding the additional frozen green beans to the recipe to be a mistake, as I feel they made the curry to watery sitting in the casserole dish.

With the use of a wok needed and my kitchen lacking this utensil, I read up on woks and which might be best. There are round bottom and flat bottom woks, rolled/stamped steel, Teflon, and cast iron woks, with and without lids. I settled on a cast iron wok due to their ability to hold and transfer heat more evenly than their steel counterparts. Also, they can presumably last a lifetime with proper care, which along with their weight, seasoning the cast iron are the only drawbacks I could find. I ended up purchasing the Lodge Pro-Logic 14-inch cast-iron wok with loop handles. It’s a little expensive and it’s probably too large for my needs, but it leaves room for growth. Plus, it was the number three selling wok on Amazon at the time. It came promptly in the mail within two days; it even said it was already seasoned, which it did appear to be seasoned. I quickly discovered after its first use that it probably could have been seasoned before use, so I had to thoroughly clean it out and season it when I was done.

With my new wok in and hand today I would have liked to try making a curry dish again, but I decided that I would wait a few more weeks before attempting that again. Plus, I will probably try using one of the many readily made curry paste at the grocery store to save some money, time, and hopefully for better results. Still wanting to try my hand at Thai food, I decided today to take a stab at making the American favorite pad Thai dish. The recipe I settled on was a shrimp pad Thai. I found this recipe easier to make then the green curry, even with my non-existent skills at using a wok. I was able to find all the ingredients at a couple grocery stores, except for the dried shrimp and palm sugar. Regular sugar was a fine substitute I am sure.  I had to look at the Indian food section at Wegmans to find the tamarind concentrated juice. Furthermore, I had to look up another recipe to make the sweetened salted radish, since I could not find them ready made. I never have been a huge fan of radishes, but these turned out surprisingly good. So, this was a two for one deal. This recipes use of a wok I found a bit challenging, as to my knowledge a wok involves quickly searing or frying food. Thus, I had to review the recipe a few times just to try and remember what order to throw things in and how long to cook them. Plus, unlike perhaps many western meals where you can probably get away with preparing the ingredients as you go, I found that I needed to prepare nearly every ingredient before I even got started (i.e., all the chopping and measuring). I still ended up having to refer to the recipe several times throughout the process and as a result burned some of it a little, but not too much. This recipe turned out simply delightful. It carries a wide variety of taste from sour, sweet, salty and spicy.

When opening the tamarind concentrate I almost immediately recalled the smell and flavor of a candy I had early on this year called Pelonazo. This was not a good flashback as I found this candy to very awkward and unenjoyable. So, I was a bit wary of using this ingredient, but it was one of the first flavors tasted and smells. It was not overpowering, like the candy, but was quite refreshing. I could taste the uniqueness that makes cilantro, the green onion, the peanuty flavor, the pickled radishes, fried tofu, and nearly everything else in it. I was quite pleased by this recipe and will make this again in the future. Unlike the green curry dish, which I believe to have messed up pretty badly, I feel this recipe was pretty close to what was intended. Except for my abilities using a wok, I don’t think I was too far off from the mark. Below are some images of this dish: 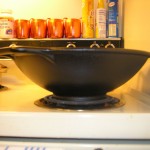 Wok has flat bottom for burner, but round bottom inside. 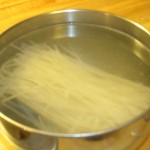 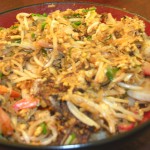 Close up of the dish 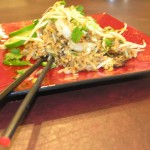 So far, I have been enjoying trying out new recipes I have never attempted. Plus, I am being relatively successful at making this for never trying them before. Also, I have enjoyed trying new and different ingredients such as lemon grass, roux, okra, tamarind, coconut milk, bean sprouts, fish sauce, and crawfish. I am going to try and make this a recurring event each week and will try to post a blog about it when I  can.